On 28th March 2022 I joined a birding friends moth trapping morning in his garden near Larvik in Vestfold. Two different types of moth trap had been used during the night and as I arrived just before 08:00 am he had just started to investigate the nights catch. Fortunately for me it turned out to a very successful catch, probably the best this year so far possibly due to the slightly warmer weather. Fortunate also as during the following days the weather turned colder which prevented any moth trapping at all. Altogether we caught 50 different moth individuals which amounted to 21 different species and a female Great Water Beetle. The beetle was released at a suitable unfrozen pond nearby. Here is a selection of images containing all species of moth we caught. English names were these exist and Norwegian names in brackets.

During the first three months of the year there is often little to tempt me out birding and no exception this year either. All birding has been very close to home or within a short driving distance and this reflects the low number of bird images taken. However here small selection of birds that did get 'snapped' between January and March.

After a long, boring, corvid-19, winter with very little new to report at last a long overdue update from me. While out counting the wintering local birds and hoping for some early migrants during the morning of 16th February, I noticed this Peregrine Falcon resting on some rocks at Rørestrand, Horten in Norway. As I moved closer I was able to take a few images of this second year bird which seemed reluctant to move as I carefully approached. After several more images were taken from a safe distance, the falcon stretched it wings and flew off northwards, quite unprovoked by my presence. From the flight images and the bird seen side on it was obvious that it had just devoured a large breakfast as commented on by a birding companion.

Peregrine Falcons breed along the coastline of the Oslofjord, but observations during winter at least here in Horten are few and far between. At Rørestrand there has been a large number of wintering Mallards which may have attracted the falcon to snap its breakfast here, but in any case a memorable observation which fortunately has been documented by these images.

On 28th January I was invited to an old disused silver mine neat Drammen in Buskerud (Viken). The purpose of the visit was to count and photograph the hibernating moths and other insects that use this mine during the cold winter months. We knew before hand which moth species were using the mine and one of these, Tissue moth (Kobbermåler), is quite uncommon in Norway. Unfortunately this particular moth had moved from its earlier position to one that proved rather difficult to photograph. We used strong headlights to find and illuminate while photographing and sometimes a normal flashgun mounted on the camera although a ring flash would defiantly have been beneficial and will be used in the future.

On 28th March 2022 I joined a birding friends moth trapping morning in his garden near Larvik in Vestfold. Two different types of moth trap ... 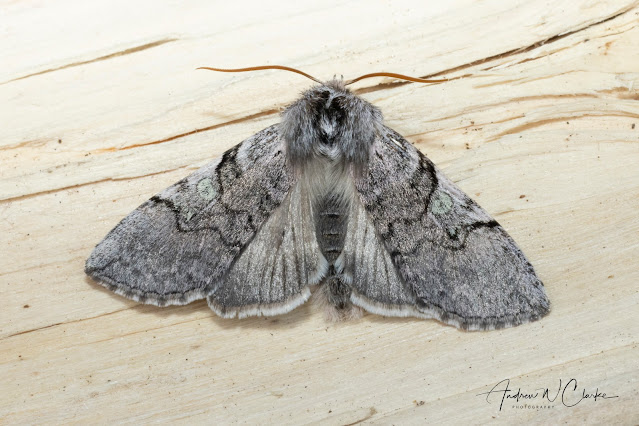 Photobirder - Andrew W. Clarke
This is a first attempt to create a photobirder blog with images from birding trips at home in Norway and from travels around the world. Images of butterflies, dragonflies and other insects will dominate during the summer months. I migrated to Norway from Bedfordshire, UK in spring 1979 to work for a year or so, but have been resident in Vestfold region of southern Norway ever since. Although having had an interest in birds and birdwatching from an early age this developed into serious birding in 1969 while living in Bedfordshire UK. ​ Bird photography has always been an important part of my hobby, but since the introduction of digital photography, ‘photobirding’ has become the main interest. Capturing birds and other nature as a photographic image not only documents observations for later reference, but also gives a lasting visual pleasure. ​ Recently photographing butterflies, dragonflies and other insects has become an important alternative during the summer months. A large selection of my bird and other wildlife photographic images from the Nordic countries and from travels around the world, will be found on my website: https//:www.photobirder.net